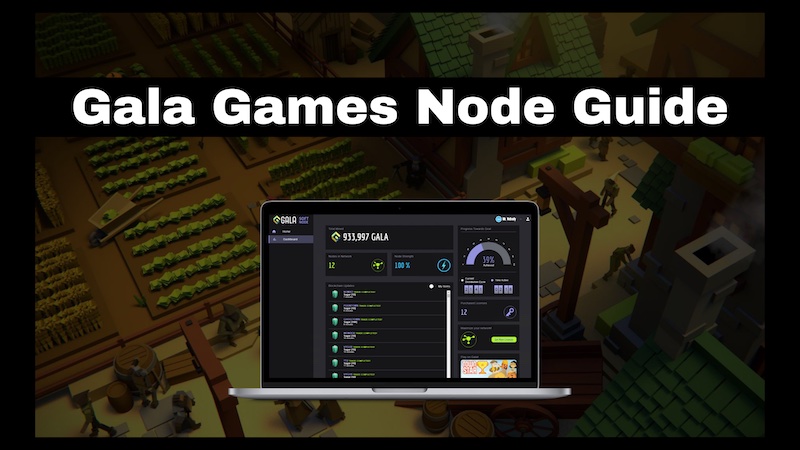 Gala Games Nodes are a way to participate in the growing Gala Games Ecosystem. The node will allow you to earn GALA cryptocurrency daily, as well as awesome NFTs for Town Star, Mirandus, and even more blockchain games in the future. It’s a much easier way to mine cryptocurrency. NFTs from Gala Games are already selling on the open market for up to thousands of dollars. Given that running your own node is a way to receive some of those NFTs, running a node has the potential to be quite lucrative.

Get Your Gala Games Node

What is Gala Games?

Gala Games is changing the gaming world by making awesome games that allow you to truly OWN your in-game items. While they are using the blockchain and NFTs, they are a gaming company first and foremost. Their team includes one of the founders of Zynga and some of the people who originally built FarmVille.

Their first game, Town Star, is already much cooler than FarmVille. Terrain and interactions between buildings, farms, etc. come into play. For example, Windmills are slowed down by nearby buildings blocking their wind. Crops are affected by pollution, etc. It’s the most fun I’ve had playing a town/farm building game. There are weekly competitions that give out prizes in GALA cryptocurrency, and sometimes NFTs and Ethereum. Even if you’re not in it for the competition, it’s super fun to play. I think it’s the best game in the genre. But don’t take my word for it; play it yourself and find out.

Mirandus is the second game they are working on, and it looks like it is going to be epic. It’s a fantasy RPG that will allow characters significant choice as to how to play the game. Whether they want to go out and fight monsters, storm dungeons, craft items, or be a landlord making real money. Land and buildings for Mirandus have started selling, and some are already sold out. Recently they sold a Citadel, complete with castle and tons of land, for an $800,000 record-breaking NFT sale! Personally, I’ve already purchased some land deeds for Mirandus and hope to get more before they sell out. The Mirandus lands that have sold out so far have risen in price significantly with some selling at almost double their initial price.

What is a Gala Games Node?

Nodes are an important part of the decentralized Gala Games Ecosystem. They provide computing power to the network, and over time, will handle more and more tasks. At this point, almost any computer can run a node. The Gala Games Node software is available for Linux, Windows, and Mac. Node owners receive daily rewards when they run their nodes. Node owners also are given voting rights to help decide the future of games on the Gala Games Ecosystem. The nodes that are currently available are “Grandfather Nodes” also known as “Tier 1” nodes. They will be eligible for receiving in game items, NFTs, from all current and future games. In the near future, the node licenses themselves will be turned into NFTs. This means that people will be able to sell their nodes, or buy nodes on the open market.

Why you want your own Node(s)

Gala Games Nodes not only help the Gala Games ecosystem, but they also help you. Each day every node that was online at least 6 hours will receive a distribution of GALA cryptocurrency. The amount each node receives depends on how may nodes were online that day. In addition to receiving GALA each day, a node may receive an NFT for Town Star or Mirandus, and in the future, more new games from Gala Games. The NFTs you receive can be used in game play by you, sold on the open market, or you can keep them to sell at a potentially higher price in the future.

How much money can I make?

So, how much money can you make doing this? Like most things, it depends on a lot of different factors. The main factor is how Gala Games performs in the future. As more and more people play the games and new games come out it could drive up demand for the GALA token, thus driving up the price. Each Gala Games Node is given GALA tokens each day it runs at least 6 hours. When this was written, GALA token was trading at $0.001628 and Gala Games Nodes were each getting about 7500 GALA a day, which comes out to $12.21 cents a day, or $378.51 a month.

In addition to the nodes getting GALA every day, they can also receive in-game items in the form of NFTs. These NFTs can be resold and are currently selling for anywhere from a few cents, to thousands of dollars. The prices of these NFTs can change as well. With some being quite rare, they could potentially sell for a significant amount in the future as more players means more demand. It’s important to note that there is no guarantee that you will get NFTs and which ones you will get. So personally, I see the NFTs as a potential “bonus” of running Gala Games Nodes and don’t include them in my base financial calculations on running my nodes.

Of course all of these numbers can, and will, change. But imagine a scenario where after Mirandus and other games come out and GALA goes up to $0.01 That would mean that the 7500 GALA you earned in one day is now worth $75, or $2,325 a month! What if it went to $.10? What if your node received an extremely rare NFT? Of course all of this is speculation. No one knows what will happen in the future and what the numbers will be.

But I don’t have a computer to run it on

You may be thinking to yourself, OK that’s all fine and good, but I don’t have an extra computer to run a Node on and I really don’t want to run it on my laptop or something. Those were the same thoughts that I had when I first heard about Gala Games Nodes. I had images in my head of people running noisy server farms in their garage that are costing them a fortune in power.

Fortunately, there is an easy solution. You can run your node on a VPS. A VPS, or Virtual Private Server, is basically a computer that you can rent from a company. It is hosted at their server site and you get remote access. The thought of a server can scare some people. They imagine having to learn command line coding and stuff like that. But you can make things simple by getting a Windows VPS.

Personally, I use PiVPS and have been quite happy with them. Their lowest end Windows VPS is sufficient to run a Gala Games Node, and only costs $6.99 a month. That’s like less than two cups of coffee! This also makes it easy to run multiple Nodes by renting an additional VPS.

Windows? But I’m a Mac guy. Yup, that’s me as well. However, all you have to do is to go to the Mac App Store and download Microsoft Remote Desktop. This will allow you to connect to your Windows VPS and run your Node. It’s pretty easy, and not technical at all.

How to set up your node

Setting up your node is easy to do. You don’t need to be technical at all.

Check out the video below for a step by step guide of how to set up and run your node.  It also includes a walkthrough of setting up a VPS.

Get Your Gala Games Node

Get a VPS from PiVPS to run you node

I’ve been extremely happy with my nodes. Every day I watch as I receive GALA in the daily distribution and check to see if I earned any NFTs. I’m in it for the long haul and am looking forward to the future of Gala Games and the Gala Games Nodes. And I can’t wait to play Mirandus!

Please let me know in the comments if you have any questions about Gala Games Nodes or Gala Games in general. Or leave a comment to just say “hi”

Definitely check out the game Town Star. It’s free to play and a lot of fun. If you sign up and play Town Star using the link below, Gala Games will give you 100 GALA tokens (and maybe even a few other goodies)

DISCLAIMER: Gala Node Guide is an unofficial site and is in no way connected with Gala Games.  Nothing on this site should be considered financial advice.  The links on Gala Node Guide may be affiliate links, which means that if you click on them, Gala Node Guide will receive a small commission at no extra cost to you.